(CNN) — It’s a typical Thursday evening in Lan Jia Gua Bao, a small no-frills eatery in Taipei’s Gongguan district, and a line stretches out of the door.

Inside, a server refills two steaming baskets with the delicious morsels the diners are all waiting for — steamed buns known as bao. Within minutes, all buns have been devoured.

The star of the restaurant’s very short menu is gua bao, a traditional street food in Taiwan with a hearty filling of braised pork, pickled greens, powdered peanut and coriander sandwiched between a fluffy clam-shaped steamed bao.

Until a few years ago, these delicacies had been savored by few beyond Taiwanese food aficionados. But after they hit the streets in New York in 2009, they’re now popping up everywhere.

“Gua bao is also called hu yao ju, or tiger bite pig, as it looks like the jaws of a tiger biting into a pig,” explains Jack Lan, owner of Lan Jia Gua Bao. “It’s a dish that we eat during Weiya, the last celebration to honor the earth god each year,”

“By chowing down a gua bao, it signifies devouring all the bad luck and bad deeds of the year, so you can start anew next year.”

There are more street foods for you to find out in Taipei. Join the 6 Hours Taipei Layover Tour to dig in with Justaiwantour’s local tour guide.

Portal for the foodies: Taiwan Layover Tour－How To Get Around Taipei Within Limited Time 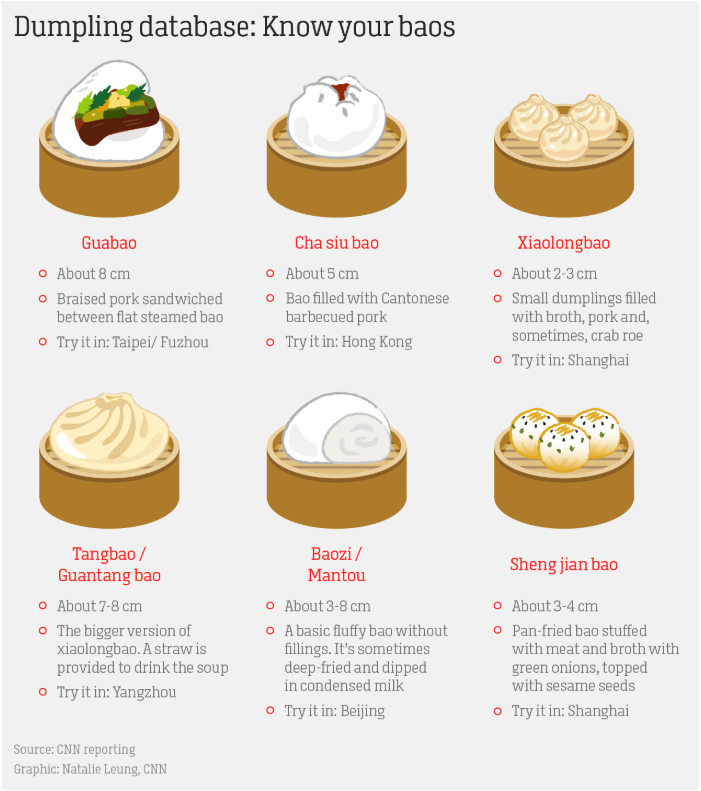 Almost synonymous with bao these days, gua bao was little known outside of Asia before American chef David Chang brought it to the menu of his Momofuku chain in 2004.

But it wasn’t until 2009, when restaurateur Eddie Huang opened Baohaus in New York City, that gua bao, the name, secured its status in the United States.

Since then, it’s spread around the world as a food trend, even if they’re sometimes mistaken for hirata, steamed Japanese buns.

“When we first started in London, it was either [confused with] hirata buns or steamed buns from David Chang,” Shing Tat Chung, who co-founded Bao London with fellow Taiwanese Erchen Chang and Wai Ting Chung in 2014, tells CNN.

Begun as a six-seater gua bao bar in a London street food market, the hip modern eatery now has four locations around the UK capital. There’s usual a queue outside each of them.

“There were even debates on hirata bun vs. gua bao,” says Chung. “But no one even remembers that now … everyone calls them BAO!”

Part of the delicacy’s popularity, says Chung, is down to its cultural links with prosperity because of its resemblance to a white purse.

“To Taiwanese people, I’d say it may not be the superstar item in a market — as everyone usually storms for fried chicken or oyster omelet,” he adds. “But it’s definitely got its quiet charm, such that it can be eaten for lunch, for after school or a late night snack,” says Chung.

The restaurant’s hubbub is almost as delicious as its food.

“Four people coming in,” says 60-year-old owner Lan, who barks out a steady stream of encouragement, orders and admonishments. “C’mon in. Don’t be shy.

The customers put down their phones and giggle.

Lan tells his story in the middle of busy service. Some 30 years ago, he came back to Taiwan after working in South Africa and found himself jobless.

“My cousin told my mom, ‘Auntie, your gua bao is so tasty. Why not let your son sell gua bao, too?’ He found me a small hawker cart across the street from the here.

Dubbed the “king of gua bao” by local media, Lan Jia is the most popular gua bao shop in Taiwan.

“Even Eddie Huang came to my shop,” says Lan. 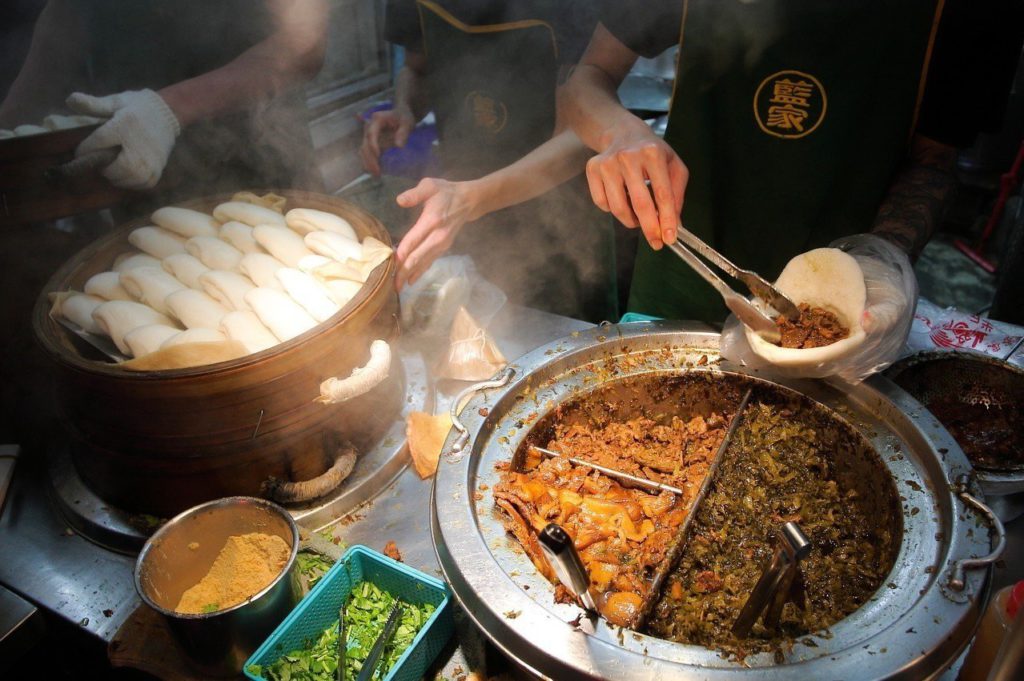 Lan is a perfectionist when it comes to his family’s gua bao recipe.

“A good gua bao has to be perfect inside out. Let’s start with the bao — a good bao is soft and fluffy,” says Lan.

He’s been ordering from the same bao supplier his mother used.

They get their pork fresh from the butcher. It’s wok fried (with garlic, shallot, sugar, soy sauce and rice wine) and braised for two hours.

“Our peanut powder is from a 100-year-old shop in Taiwan that roasts and grinds their own peanuts. It’s naturally more expensive but it smells and tastes better,” says Lan.

Extra juice and sauce of the ingredients are meticulously spooned out so that when they hit the bao it doesn’t become soggy.

Chung sums it up: “With the perfect gua bao, everything dissolves, the softness of the braised pork belly is only met with a slight texture of the fermented mustard greens and peanut powder. Sweet and savory with a sourness from the pickle in one go.” 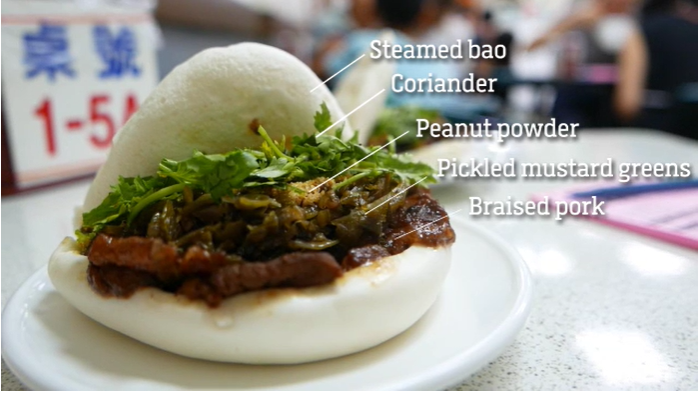 Lan puts the global popularity of gua bao down to its affinity with other international snack classics.

“I think gua bao is easy to love worldwide because it shares similarity with a hamburger for Americans, a rou jia mo [a meat sandwich from Shaanxi, China] for Chinese and a taco for Mexicans,” he says. “But gua bao is a more technically advanced version of hamburger as its fillings won’t fall out.”

The dish has other attractive qualities, says Chung.

“Bao texture is so soft it has an appealing texture, while the sweetness from it is also slightly addictive.

“With a closed bao, the filling is steamed inside, which restricts what you can put in. The open format opens up more potential to what you can fill it with.

“It’s soft, sweet and hot and doesn’t feel as heavy as bread,” he adds.

Bao London offers six types of bao in its minimalist and sleek bar restaurant. These including a vegetarian-friendly daikon radish version and one with fried ice cream flavored with Horlicks, an English malt drink.

Lan Jia serves only one kind of gua bao — the classic, accompanied by one of five meat options: fatty, lean, half-half, mixed with more fatty meat and mixed with more lean meat.

“It’s my first time here and I like that it has a lot of options for meat,” says Teresa Yu, a customer braving the Thursday night queues. “Most gua bao shops don’t usually let you choose.”

Lan is proud of the options offered by his venue. “We can’t let our customers wrap their own gua bao so we try our best to make it the way you want it,” he says. 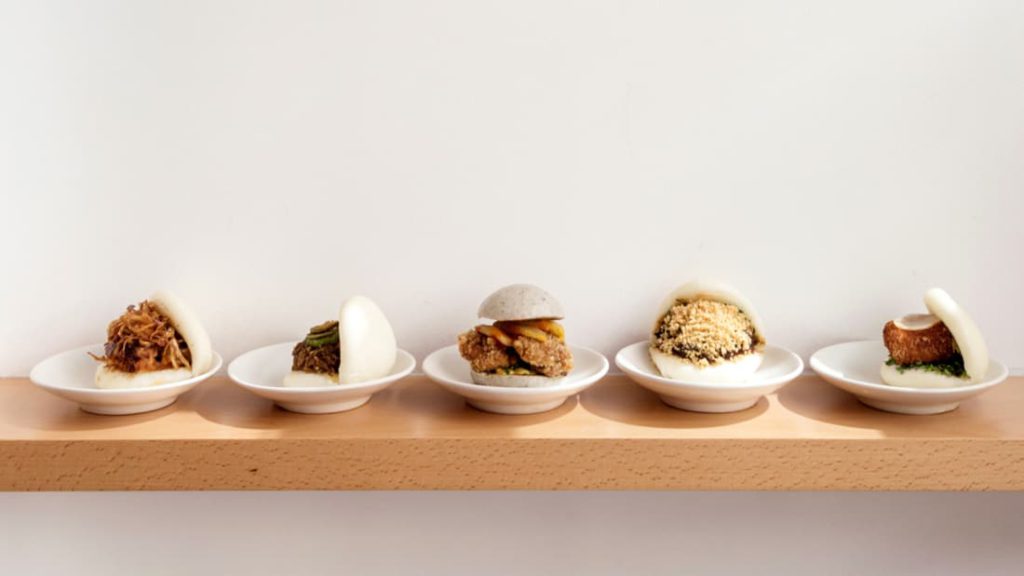 He’s also proud of his connections to many of his regulars.

“Selling gua bao for three decades now, the most memorable things are witnessing.

“The most adorable customer was an old man who has been coming here for years. He never knew we had a queue outside. He always came straight up to greet me and said, ‘Boss, here I come again’ and I let him in.

“One day, he stopped coming and I was really sad. His daughter came and told me she was here to see me as her father told her that I was really nice to him,” says Lan.

“I thought maybe she would also tell me her father left me some money but that didn’t happen, of course,” Lan jokes.

Lan hopes his son will take over the legacy one day.

“Gua bao, for me, is a gift from my mother. I’m determined to make it famous and build a 100-year-old guabao brand,” says Lan. 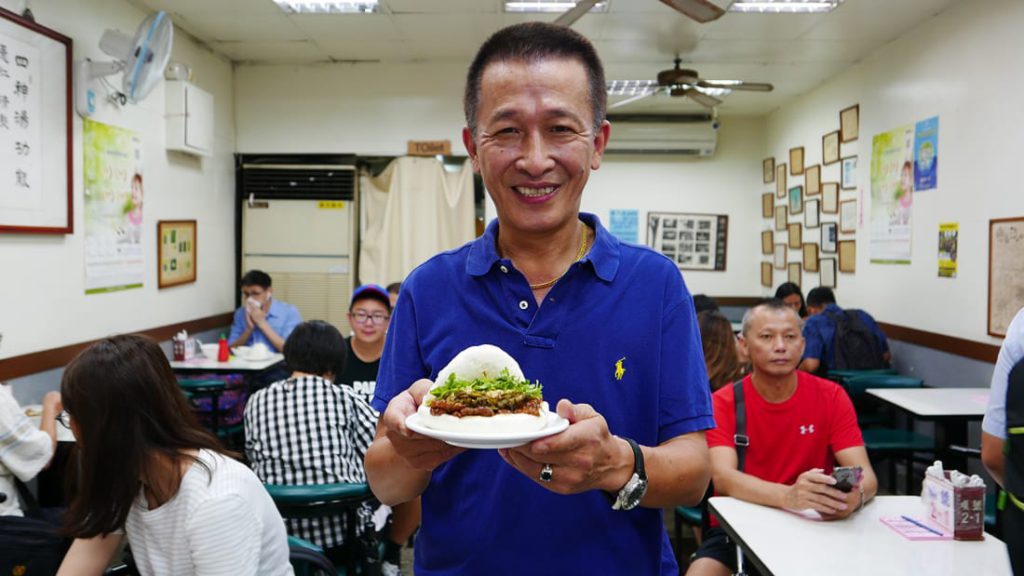 Can’t get enough of Taiwanese foods? You may also like: Popiah－The Traditional Fast-food In Taiwan

This article is reproduced from CNN－The secret of gua bao: The Taiwanese street food taking over the world