What is Taiwan doing right?

Since reports began to emerge about a new coronavirus (COVID-19) outbreak in the Chinese city of Wuhan, over 100,000 cases have been confirmed worldwide within the months, a figure many agree is far below the actual number. All signs pointed to the COVID-19 being bad news for Taiwan. The island is just 81 miles from China, with frequent flights back and forth. More than 850,000 of the island’s 23 million citizens actually live in China and another 400,000 work there. Taiwan had 2.7 million visitors from China last year.

How has Taiwan, a country on China’s doorstep, managed to contain COVID-19 when so many countries have failed? Taiwan also sits near Japan and South Korea, both countries with some of the world’s worst outbreaks of the deadly coronavirus, but the island itself has just 48 isolated cases with only one death by March 12, 2020. That’s many fewer than Japan (1334 cases, 22 deaths) and South Korea (7869 cases, 60 deaths). The Netherlands, with a comparable population to Taiwan, has five times more cases without having as much as direct travel with China.

On Dec. 31. 2019, the instant Taiwanese officials learned that China notified the World Health Organization of a “pneumonia of unknown cause.” Within a week, they expanded their surveillance net to include anyone who had traveled to Wuhan in the previous two weeks. By Jan. 20. 2020, the government activated the Central Epidemic Command Center and coordinated all government efforts to combat the growing crisis. On Jan. 26. 2020, five days after it confirmed its first case, Taiwan banned arrivals from Wuhan, earlier than any other country. At first week of February, Taiwan began rationing surgical masks and restricting the entry of passengers with a travel history in China, while requiring a 14-day quarantine for those who had been to Macau and Hong Kong.

After the painful but valuable experience of dealing with SARS in 2003, Taiwan’s government is making maximum and mightily effective efforts to prevent further outbreaks on the island. Being ranked No. 1 with its health care system and having advanced medical skills and cutting-edge health technology, Taiwan was able to link its national health insurance database with its customs and immigration records and quickly identify anyone who entered the country from China. Taiwan’s well-trained and experienced public health officials were quick to recognize the crisis, and launched an emergency response to control it.

Transparency has been vital. While China has received serious criticism for censoring information about the outbreak, the Taiwanese government has asked television and radio stations to regularly broadcast new information. As for Centers for Disease Control announce new cases daily.

Is it safe to travel to Taiwan?

As of March 12, 2020, major countries such as the USA, Canada, United Kingdom, Australia and New Zealand have NOT issued “specific travel advisory” for Taiwan.

United Kingdom – “Taiwan has put in place a number of measures to combat coronavirus, including changes to entry procedures and restrictions on entry to Taiwan.”

New Zealand – “The Ministry of Foreign Affairs and Trade is not issuing a specific travel advisory for Taiwan at this time.” 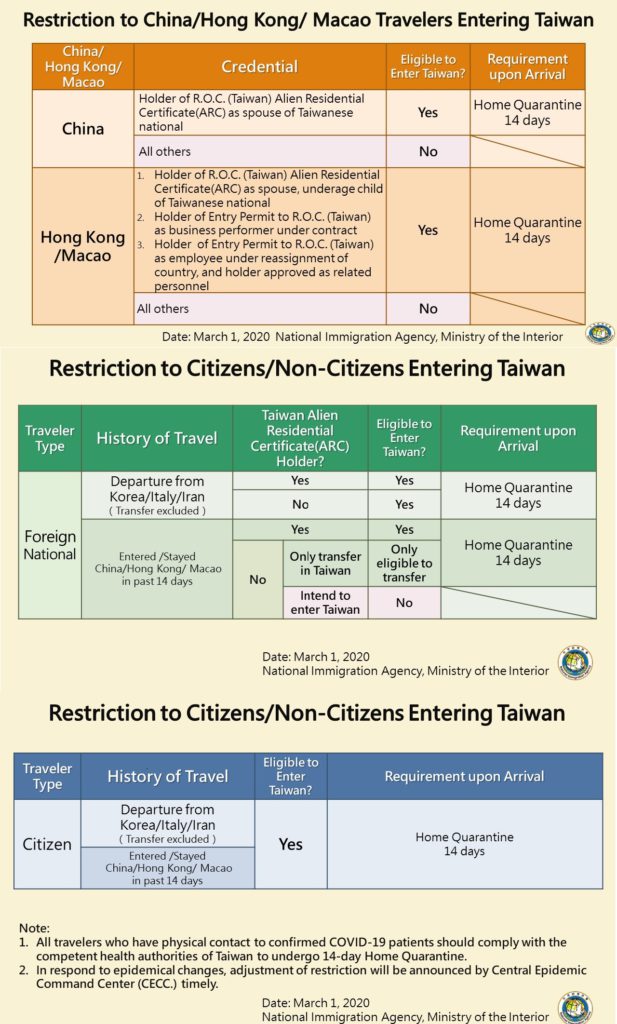 Overall, with the lowest incidence rate per capita — around 1 in every 500,000 people, that is to say, Taiwan is still safe enough; or to say, one of the safest place to visit in this period (and the future). Just remember to follow those steps below, you will enjoy Taiwan as you should do!