Haven’t you read the previous article? Check this out

Before I visited Taiwan, my impression of Taiwan came from Taiwanese movies, Xi Murong’s (席慕容) poems, Chiang Hsun’s (蔣勳) speech of aesthetics, Lung Ying-Tai’s (龍應台) essays, Lo Da-Yu’s (羅大佑) songs, etc. It was more real for what I saw but not what I heard. Finally, I got the chance to travel to Taiwan, where I’d been longing to pay a visit. What the most heart touching was the warm hospitality of people I met in Taiwan(Read more:11 Reasons Why You’ll Fall in Love With Taiwan’s People), the tour guide, the driver, and the Taiwanese. 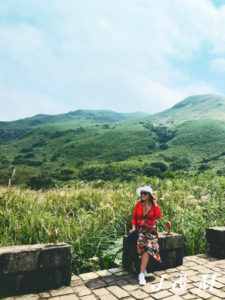 On the second day of our arrival in Taipei, we planned to visit Yangmingshan, Yeliu Geopark, Gold Waterfall and Jiufen Old Street. The most famous Taiwanese song, “Come to Meet You in Taipei in Winter 冬季到臺北來看雨,” was sung by Meng Ting Wei (孟庭葦). We met drizzle in fall as well. It kept raining for days. When I finished breakfast and got on the bus, I worried about how to enjoy ourselves to the full due to the rainy day. As the tour guide, Mr. Chou, introduced the attractions, we looked out from the window, not only the rain stopped, but also the sun came out. We were excited to say that we were so lucky.

In 1962, Yangmingshan National Park was organized to be built. On Sep 16. 1985, Yangmingshan National Park was formally established. With the total area more than 11 thousand hectares, it includes Yangmingshan and volcano groups, which takes Datun Mountain and Qixing Mountain as a center. Because of the influence of volcanic activity, the ground surrounding the sulfur vents and hot springs was formed, making it unique and magnificent, hence it is the smallest but the most famous national park among five national parks. It is one of the most famous travel spots in northern Taiwan and also a great summer resort.

In a year, the four seasons bring different scenes to Yangmingshan. In winter, the clouds float. In spring, the calla lily and cherry blossom. In summer, the brook gurgles and the grass and trees are luxuriant. In the fall, the silver grass grows over the mountain and swings in the wind.

(You may also interested in the flower season of Yangmingshan)

The sliver grass in the fall 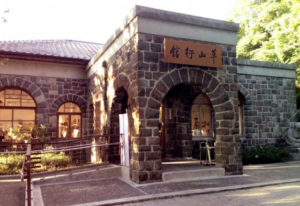 Furthermore, the historical landscape is more distinctive. Jhongshan Building was built to perpetuate the memory of Mr. Sun Yat-sen’s centennial birthday. Grass Mountain Chateau was the first official residence where Chiang Kai-shek(蔣介石) and his wife, Song Mei-Ling(宋美齡), stayed in when they first visited Taiwan in 1949. After they moved to Shilin Official Residence, they still came here to avoid the summer heat. Unfortunately, Grass Mountain Chateau was burnt down at late night on Apr. 7th, 2007.(Do you know there are American military housing in Yangmingshan?) 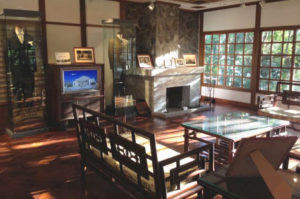 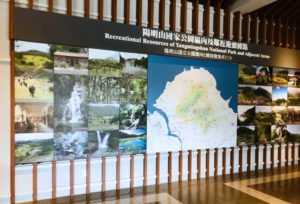 We arrived at YangMingshan National Park Visitor Center on Jhuzihhu Road and experienced the hard earthquake caused by volcanic eruptions. We also visited ecological experience room and saw various butterfly specimens. YangMingshan was gorgeous, which deserved to be called the back garden of Taipei.

The second stop was Siaoyoukeng at an altitude of 805 meters. It was a notched volcano, which was at the northwest of Qixing Mountain. Yangmingshan was once an active volcano, while now it was called dormant volcano. When a volcano activity stopped, the heat energy still remained. This heat energy heated the groundwater, making the underground accumulate the pressure of steam, which finally caused to a burst near the crater. The steam came out from the burst. The rocks around the crater were severely weathered because of the effect of high heat and water, which made the collapse of Siaoyoukeng. This phenomenon was also called post-volcanic action. 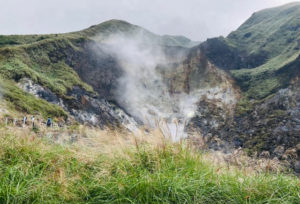 (Looking far into the distance from Siaoyoukeng. Photo credit: 若敏)

Everybody followed the tour guide to the Sulphur smoke spout of Siaoyoukeng. The sunken place was lacerated. Not even a blade of grass grew. The fumarole permanently spouted Sulphur steam. There were a lot of yellow Sulphur crystallization and hot steam near. We walked up to the wooden path, saw the white smoke came from the fumarole in close distance and smelled the Sulphur in the air. The pungent smell of Sulphur smelled like rotten eggs. It is not appropriate to stay here for a long time. 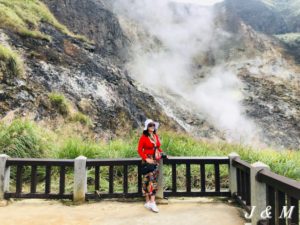 We were reluctant to leave Yangmingshan. We waved goodbye to the rolling mountains, ethereal steam, and the silver grass.

The song, “Yangmingshan(陽明山),” composed by Jay Chou(周杰倫) rang with the wind:

Facing the wind and Enjoying calla lily on the way.

In this blossoming season, you hold me tight.

You said this is an unspeakable secret.

Shh! Maybe there are truly countless unspeakable secrets in Yangmingshan that you should discover and imagine by yourselves. Perhaps next time, spending an additional day, taking a stroll, going hiking to Qixing Mountain, seeing calla lily and cherry will be an amazing experience for a different flower season.